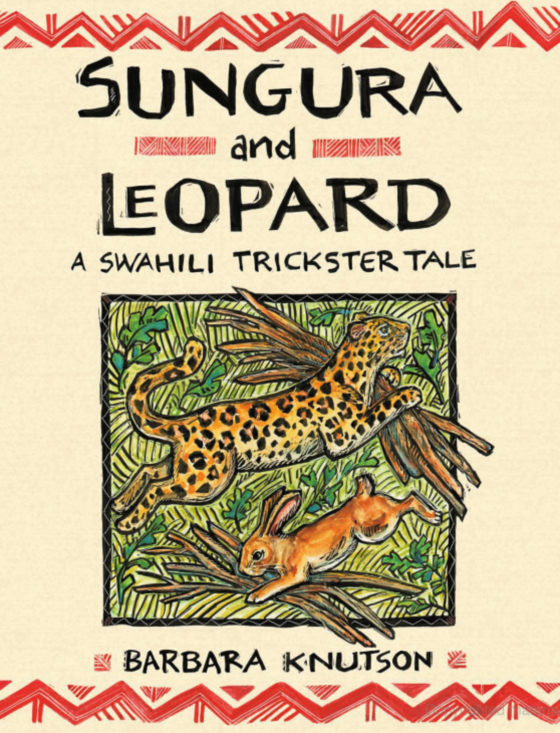 When I was a child in South Africa my father would read every night to my brothers and me. One of our favorite stories told how Kalulu the clever hare helped a ram who had to share a house with a leopard. That tale came from Nyasaland (Malawi), retold by Geraldine Elliot. Twenty years later in Tanzania I found a Swahili version of the same story—without the ram. That means that long ago this tale, like many others, traveled for hundreds (maybe thousands) of miles from one storyteller to the next, from one language to another. The story had no publisher or website or advertising budget; it just survived on its own, getting scuffed and bent and translated as it traveled. My book, Sungura and Leopard, is one more repetition, told in my own language, putting in the parts I like best from the versions I know.

The art for this book is in scratchboard with watercolor and gouache paint. The borders hold hints to what is going on in the text. For instance, on the page where the leopard wonders who brought all those sticks for building a house, you can see the hare running away in the border design.

The end-pages are actually my favorite part of the book. I carved rubber stamps out of erasers: a hare, a leopard, a bush and a zig-zag design. I had to concentrate hard to print the whole page just right (it took me four tries.) I still use those rubber stamps, except for the zig-zag which my dog ate like chewing gum.

Trickster tales start wtih a main character who gets no respect, especially from the stronger animals or people around them. With surprise and creativity the trickster escapes teeth and claws, or queens and kings. In real life everyy human being feels like the underdog sometimes, and these stories reach that deep wish to come out on top for a change.

Besides the character of the clever little animal, many African tales show big, fierce animals that depend too much on their size and too little on their brains. Of course, it’s not really that simple in the animal world, but it does tell us something about human nature: powerful people have their weaknesses too.

Take a look inside:

Awards and Reviews for Sungura & Leopard

“The vigorous humor of the illustrations and the broad comedy of a familiar story scheme are both delightful.”
— Horn Book